In tribal cultures the first haircut has usually a very significant place as a part of the rites of passage. With the hair being cut, the identity of the person is being transformed in an irreversible way – he becomes somebody else and people around him will treat him differently from that moment. Sadly, there is a great gap in our western society to mark important moments of transition in human lives. We are quite good in the outer part of the celebration (think of birthday parties, weddings or finishing UNI), but often completely miss reflecting the inner transformation that happens during those times.

When we decided to cut our boy’s hair it came from my realisation that we both are ready to enter a different stage of life and our relationship. He didn’t want his hair to be cut for more than 3 years – and me neither. But then I got the worst migraine ever lasting for more than a week. I could hardly function as a mother. I had to think about the reasons why this is happening to me. Is it related to the uncertainty that the corona virus brought in our world? About our finances? About my fears of future ? I tried to work with various of emotions and nothing shifted.

Until I realized a simple truth: it started the day I did the dishes with Jonáš in the carrier because he was crying in fear of making a poo. And the day before I cycled with him in the carrier. I cycled with him on my back several months several times a week and sometimes walked like that when he was too tired or didn’t want to walk. I carried him up and down the stairs to the bathroom as he didn’t want to stay downstairs alone when I went to the toilet. I carried him far too much. I carried him too far. On the physical as well as emotional level. We both need to learn to do this differently.

This was my realization: When I give too much not from the need to give but from the fear of not being good enough or facing the negative reaction, it will turn against me at some point and neither my son nor I will benefit. Knowing and expressing my limits is essential for creating healthy relationships.

I am not gonna carry you this much any longer. But I can always hold your hand and help you when you need me. 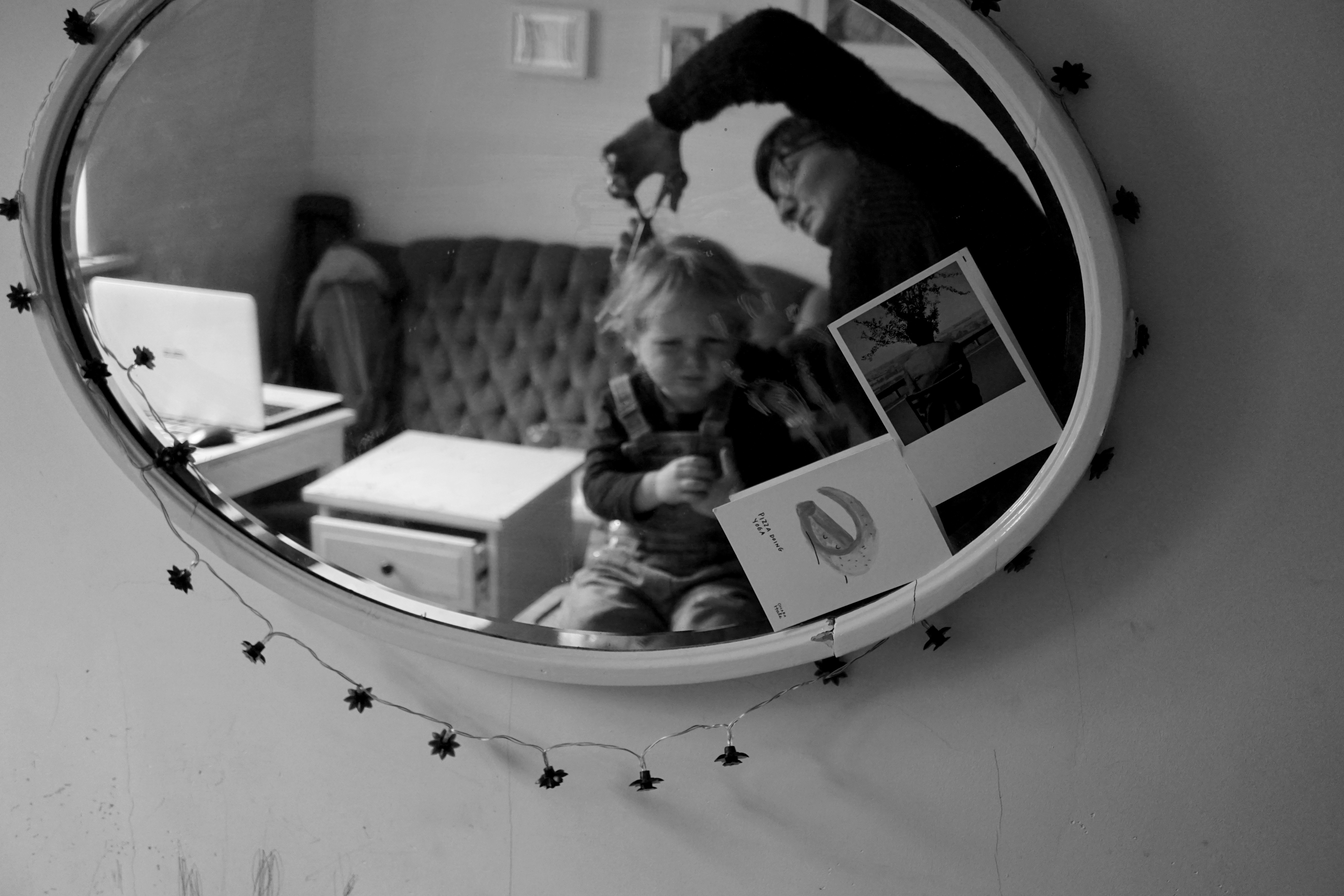 His golden curls were falling on the ground and with them the precious memories of pre-boy time. The image of the angelic-like toddler has been covered with a cheeky boy face.

I remember the period when I was pushing the time so much forward wanting the little being to be a bit more independent. To not have to hold it on my lap while eating or peeing. To carry him constantly on my body. To wake up 5+times a night to feed him.

Here he is a human being who is able to use a knife and scissors. Who is able to climb up the toilet and make a poo on his own. Who can ask: are you alright mummy? Who can blow my toe when I kick it. Who makes up his own versions of songs. Who knows more building machines and carnivorous plants than me. Who is able to communicate in two languages.

Here I am feeling suddenly so sorry for not being able to carry him so much anymore as my body says: enough!  as it did when it decided to stop giving milk a year ago. Not me, my body. Because I haven’t been strong enough to decide for myself being too scared to face tears and anger of my child.

Half way through the cutting Jonáš changed his mind. He didn’t want his hair to be cut anymore. He started to cry asking me to “glue his hair back”. I held him for about an hour in my arms on the sofa. My heart was crying too. Suddenly there was a different boy weeping on my chest. I didn’t know him that well yet. The boy who will soon go to nursery and I won’t be the main and only source of his life experience anymore. He will make his own friends whose mothers I might not know. He will make his own bonds. And the one between us might slowly change. He will have to learn to deal with other people without me interfering. He will be his own person. It won’t ever be the same. 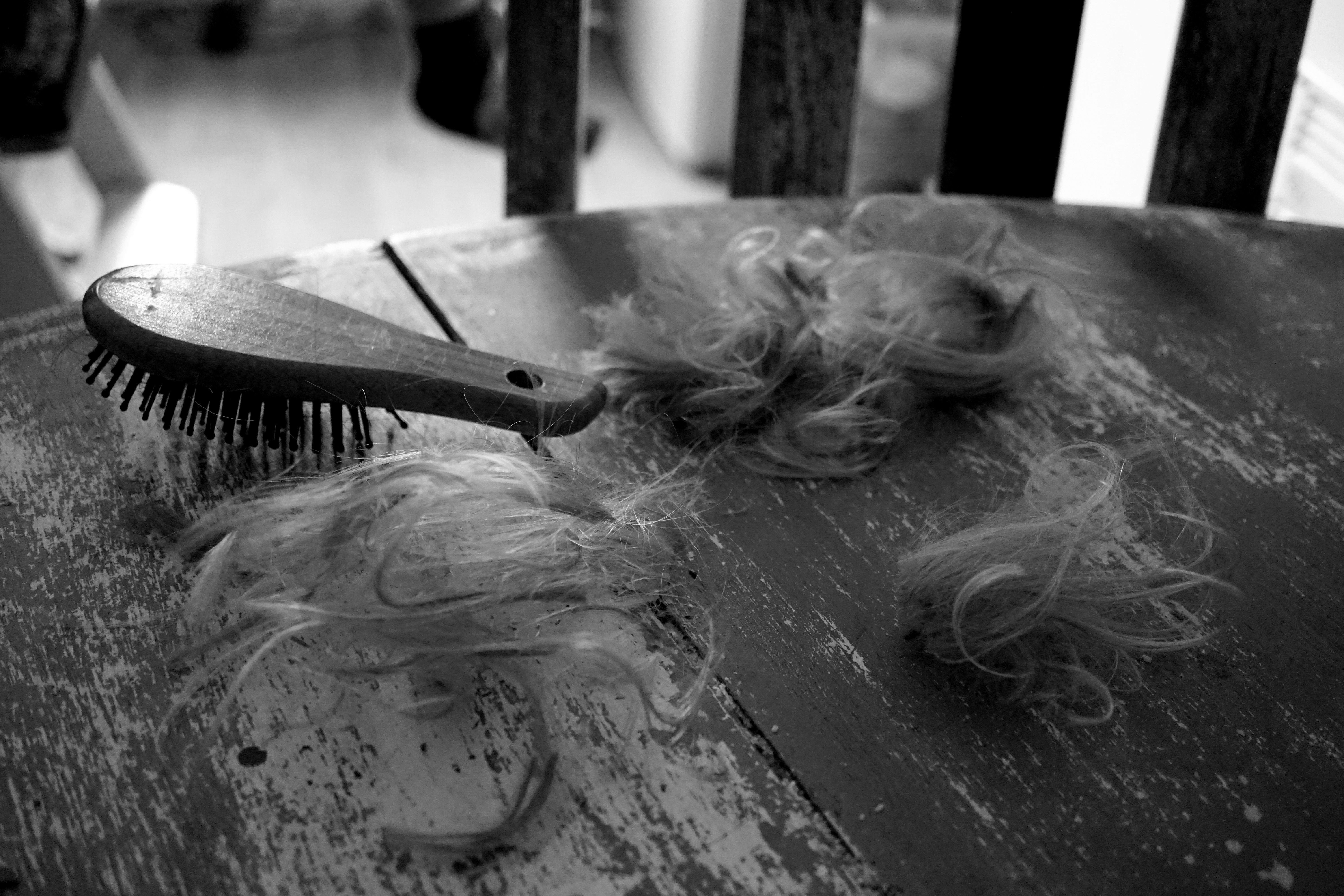 Jonáš’s first haircut has a symbolic meaning for us – cutting off our old common habits and creating a space for new ones. Since we have done it I have consciously started to step back to leave him more space exploring the world himself which helped him with the transition to nursery that came several months after. Looking back I can clearly see how it is connected to the fact of handing him over to the institution.

I am definitely not saying that the ritual has to take the form of a haircut and I understand that some parents don’t want to cut their children’s hair at all for various reasons. I am simply offering a different point of view on what it could mean to cut hair in a certain time and highlighting the importance of marking moments of transition in our lives in some way.

*First published in the spring 2021 issue 72 of Juno Magazine: JUNO MAGAZINE – a natural and mindful approach to family life